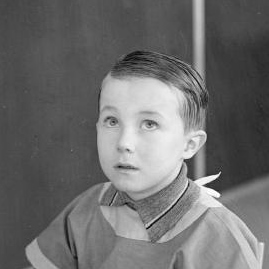 Recently, my son had a piano recital at a local retirement facility. I have a bad habit of being late to these types of things, so sometimes I try to trick myself by making the event time in my phone’s calendar a half hour ahead of the actual start time. Such was the case with this particular piano recital.

The day of the recital my daughter’s dance rehearsal got out earlier than expected, so we decided to go on to the performance space and be uncharacteristically early.

Well, I had forgotten about my calendar trick, so I ended up in a retirement home with an 8 and 3 year-old to entertain for almost an hour. So, I did what any lazy mom would do; I headed for the van to grab some electronics. I left my son inside, so he could run through his selections on the unfamiliar piano, and I was taken aback by what I found when my daughter and I got back from the parking lot.

My son was sitting at a table with one of the residents of the retirement facility, playing cards, laughing and chatting like old friends. The older gentleman had a good seventy years on my son, but the more they played, the more I simply saw a couple of boys. It was truly delightful to watch.

When I talk about hunger in Missouri, it’s sometimes disappointing to me that many people don’t experience a genuine tug on their heartstrings until I start to talk about hungry kids. I’m not disappointed that people care about childhood hunger; I’m simply concerned about the lack of distress regarding hungry adults and seniors.

Senior hunger demands far more attention than it receives. The older population is especially vulnerable to food security, because of fixed incomes and impossible decisions like whether they should buy their medication or groceries. Lack of proper nutrition puts seniors at high risk for a host of chronic health conditions.

Older households are also less likely to apply for or receive benefits from government programs like SNAP (food stamps). Maybe seniors eschew the idea of this kind of assistance, because they don’t want the stigma of being on “welfare.” They may also believe the misconception that accepting SNAP takes help away from others who need it more. Whatever the reason, food insecure seniors often have an easier time accepting food from their neighbors at a local pantry than other types of aide.

In Missouri, 16 percent of clients served by Feeding Missouri food banks are seniors 60 and older, and that number will continue to rise in the next decade. In fact, the number of food insecure seniors nation-wide is projected to increase by 50% when the youngest of the Baby Boom Generation reaches age 60 in 2025.

For this reason and more, food banks must be supported in the critical work they do each day. Our neighbors in need of all ages need your gifts of volunteer hours, financial contributions or food donations. And if you still find yourself moved more by the idea of hungry kids, just remember we’re all kids at heart.