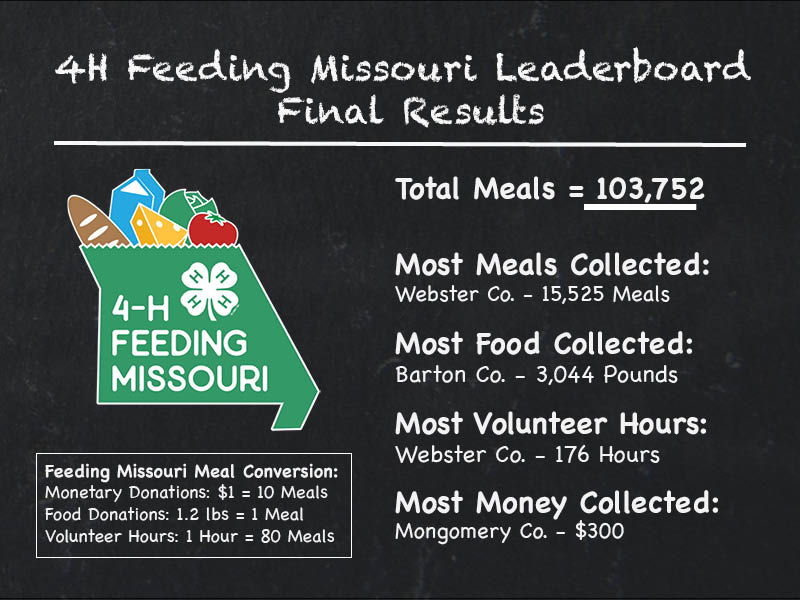 University of Missouri Extension 4-H partnered with Feeding Missouri, a coalition of Missouri’s six major food banks that works to feed people in every county in the state and the city of St. Louis. Throughout February, 4-H’ers engaged in a friendly competition to see which counties could contribute the most food, volunteer hours and monetary donations while raising awareness about food insecurity in Missouri, where 1 in 5 children experience hunger.

The results of the challenge were announced March 17 at Missouri 4-H’s annual Teen Conference. MU Extension awarded $1,000 prizes for counties that collected the most pounds of food, most monetary donations and most volunteer hours worked, as well as to the county that raised the most meals overall, a calculation based on a combination of pounds of food, volunteer hours and monetary donations.

MU Vice Chancellor for Extension and Engagement Marshall Stewart was unavailable to present the awards but recorded a video congratulating the 4-H members. “You’ve put your hands to larger service for your club, your community, your country and your world,” Stewart said.

Scott Baker, Feeding Missouri’s state director, said the network was “blown away” by the amount of food and funds 4-H’ers collected. “Your efforts and enthusiasm have made a real difference for our neighbors in need across Missouri,” he said. “Even more important than hitting goals or winning competitions is the fact that you have helped us bring awareness to this important problem.”

Awards of $100 were given to counties that were runners-up in each of these categories:

Most pounds of food: